Carbon is the 4th most common element in the universe (by mass) after hydrogen, helium and oxygen and the second most abundant mass of our body. Carbon is everywhere, it is extremely cheap and all the countries around the world have access to carbon. Two pure forms of carbon that everyone knows are diamond and graphite. Diamond in Greek means unbreakable and it is a metastable form of carbon. Another form of carbon is graphite, which means “to write” in Greek.

In graphite, carbon atoms are arranged in hexagon sheet one on the top of each other. Within one layer, carbon atoms are bonded together with super strong bonding which is called covalent bonding as shown in figure 1a. Between layers, these sheets are held together by the electrostatic force called van der Waals bonding (shown in figure 1b). The force between layers is very weak, so it’s easy to remove these layers. If you manage to remove one of those hexagon sheets, you will get a single layer of graphite which is called graphene. 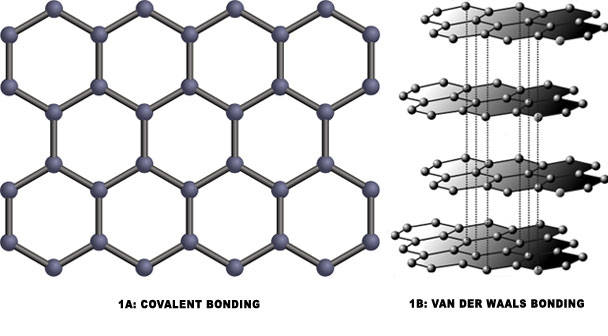 How to make Graphene at home

Graphene is easy to make – at least in small amounts. Just pull off the thin layer of graphite with sticky tape and repeat the procedure again and again until you are just left with a one atom thick layer.

This way of production of Graphene results in best quality Graphene. However, you can only produce small amounts that are just enough for scientific and academic purposes, not for industry purposes.

This video shows how to make Graphene with sticky tape:

A group of scientists recently (on April 20th, 2014) published an article in which they describe how to make Graphene using a kitchen blender. The approach is called liquid shear exfoliation. The full article and abstract can be found here. In their experiment, they used shear mixing (which is just a fancy word for high-tech blending) and some special liquid which you can actually replace with water and dish detergent (trust me, it works the same). Then you need to powder a few pencil leads and add the powder to the detergent solution and blend it for a while.

In order to confirm the existence of Graphene in your detergent solution, you don’t need to have special microscopes and other fancy equipment. There’s a quick way that you can use to estimate Graphene particle size. If the Graphene particles are too big, they will sink to the bottom of the container. The smaller one will float on top.

The really small particles are called nanoparticles and they are so small that they will be suspended by water. After you make enough nanoparticle Graphene, you must filter the suspension and get rid of big particles then leave it to dry.

The video below shows how to make Graphene in your kitchen:

These two methods are not the only methods of Graphene production. There are lots of researches going on around the world for mass production of high-quality graphene, which I will explain in my future posts. Researchers around the world are trying to develop green methods to produce Graphene with environmentally friendly approaches.

As Professor Jari Kinaret, Director of the Graphene Flagship, said in one of his talks: “In the future, you can imagine that graphene will be produced roughly the same way as newpapers are produced today with really large machines that produce 7 meter wide material with a 200 km output per hour.”

2 comments on “Can I make my own Graphene?”

Graphene in the News

About the Author:
Sarah Riazimehr

Manage Cookie Consent
We use cookies to optimize our website and our service. You can accept all cookies or make your individual selseciton and save. Cookie settings can always be changed via the link in the footer.
Manage options Manage third parties Manage vendors Read more about these purposes
View preferences
{title} {title} {title}